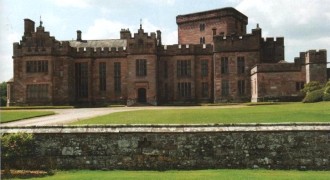 Greystoke Castle has been in the "Howard" Family for about 500 years.  The original was built in 1353, but had been badly damaged during the Civil War.  It was rebuilt only for it to burn down again in 1868 when (rhumour has it) a maid left a lit candle in an linen cupboard!  Once again it was restored.

During the 2nd World War it was taken over by the army and used as a Prisoner of War Camp, the estate was also used to train Tank Drivers.  After the war much of the land and property wa sold off to pay for the incoming "Death Duties" tax.

Between World War 1 and World War 2 Greystoke Forrest was sold to the Forrestry Commision, but today it is owned by Malcolm Wilson a former World Rally driving star, and Managing Director of M-Sport based at Dovenby Hall near Cockermouth for his World Class Rally Driving Team and workforce.  Every now and then you are able to hear them 'testing' to help them get the job right.

Another highlight in Greystoke Forrest has been a round of the World Championship Husky Racing Teams.  The last time they were here was January 2010 when we also had lots of snow and we were lucky enought to actually have a team stay with us here at Stafford House.  There were 7 people and 3 long wheelbase vans, all kitted out with colour co-ordinated dog beds, food bowls and leads for 37 Husky's!

The Castle is not open to the public, but is a sought after venue for Weddings and other events, such as book signings, open air concets and much more.

The next thing that may spring to mind is of course - Tarzan!  Apparantly the first manuscript didn't actually mention Greystoke, but was subsequently changed at a later date.  The only link being that Edgar Rice Burroughs (Tarzan;s Author)  had been a war correspondent and had met a member of the Howard Family during the Boer War and consequently became friends.

And yes - the Castle is haunted, there are apparantly 9 in total and some have been seen by the current owner quite recently, though he admits he doesn't normally see things perhaps it was just a trick of the light, but assures us that he has every intention to come back after he's gone to see how things are coming along, and  the perfect nuisance of himself!

We look forward to welcoming all of our Guests, new and those who are returning to

With the "Utmost Safety" of our Guests

in mind, we take every precaution possible.

This includes all "Updated Guidelines" from the Government

During the 1st Lockdown in March 2020, we invested in a

We use a special solution that is certified to kill ALL Viral and Bacterial Infections, should there be any present.

We also meticulously clean and sanitise all areas which could have been touched either by ourselves or by our Guests, and finishing with a "Steam Cleaner"

so that we can be sure that everything is safe.

We wear Face Masks, and there are Hand Sanitisers in all 3 Bedrooms as well the Breakfast Room of the Main House.

The Lodges also have Hand Sanitisers in the Kitchen.

Your Custom and Patience,

and we will look forward to seeing you all again very soon.

Our En-Suite Double Room in the Main House has been appointed with wooden pannelling, there is one more surprise still to come hopefully in January 2022, I hope that you will like it!

After the 3rd Lockdown we were allowed to re-open our Lodges on 12th April 2021, and we have made a few changes..

Blencathra Lodge now sleeps 2 People, and Pennine Lodge can sleep up to 6 People.