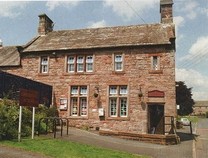 The School was founded way back in 1838 by Lady Mabel Howard, who at the time resided in Greystoke castle.  It is sited just about in the centre of the village and practicaly opposite the Post Office/Stores

Having been born and bred in Greystoke myself - lets say 'a number of years ago now' Greystoke Primary was my first School.  I have many memories from those days, and just like any other pupil some good and some not so good, but the main of them I remember being good.

One of my lasting memories of Miss Bladworth was that when things wern't eactly going to plan, and some of the children were trying to get a little wayward - she would suddenly stand up and say rather sternly - "Roll on Hometime"!!

Another fond memory I have was that every day about 3pm we were all asked to sit on the floor in a big semi circle, as this was when the sweetie tin would come out.  We would take it in turn to pass the tin round to ensure that everyone got a sweet (also to stop anyone trying to take two!), and we would then listen to a story chosen by one of the pupils that was read aloud enthusiasticly by Miss Bladworth before we all went home.

The only things I seem to remember about Miss Eyre was firstly she was a very good teacher, but woe betide you if you tried to get out of hand - she took no prisoners, those who tried only did it the once!  The other thing I remember was that when she did get mad she would put her pen between her teeth - sideways, before delivering the wrath!!

With the "Utmost Safety" of our Customers in mind, we are taking every precaution we can along with any "Updated Guidelines" from the Government as to how to keep Stafford Hpuse open for Business safely.

We invested in a "Fogging Machine" which along with the solution used has been certified to kill ALL Bacterial and Viral Infections, should there be any present.

We also meticulously clean and sanitise all areas which could have been touched either by ourselves or our Guests, and finishing with a Steam Cleaner so that we can be sure that everything is safe.

There are Hand Sanitisers in the Rooms as well as the Lodges, and we also wear Face Masks and Gloves too.

We will look forward to welcoming you to Stafford House in the very near future.