Nicholas Gordon Richards was born on 25 February 1956 in Alnwick, Northumberland. Specialising mainly in National Hunt racing, he is based at stables in Greystoke, near Penrith, Cumbria, England. 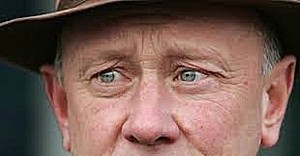 Nicky, son of the late Gordon W. Richards has the same energetic appetite for sucess within the yard. In his own right Nicky is already a "Record Breaker" when he took up as a jockey between 1971 and 1975, he is still the only person to have won his debut races on the Flat, over Hurdles and over the larger Fences!  He became British Champion Ameteur Flat Jockey in 1973.

He  subsequently worked as assistant trainer to his father, Gordon W. Richards, and took over the training licence when his father died in 1998. He saddled a winner with his first runner, Better Times Ahead, at Carlisle Racecourse in October 1998. The most successful horse he has trained to date is Monet's Garden, winner of the Ascot Chase, Melling Chase and Old Roan Chase in 2007. The grey won his third Old Roan Chase in 2010 having also won it in 2009.

Nicky's best horses so far have been "Better Times Ahead", "The French Furze", "Faasel", "Turpin Green" and of course "Monet's Garden" his star prformer whom he nearly lost to a foot infection in 2011.  After much careful nursing and TLC, the handsome, dappled grey is up to his old tricks of trying to nibble the sleeves of visitors who come to wish him well in his retirement from racing and his new show career, in the hands of Nicky’s daughter Joey.

Gordon Richards will not only be be remembered for his name, but also for the feat of training two grand National winners in his magnificent career which spanned 34 years in National Hunt Racing.  The first emphatic win was with Lucius in 1978, then again in 1984 with Hallo Dandy.

Born in Bath, Somerset on 7th September 1930, Gordon was the eldest of 10 children born to a local Timber Merchant and his wife.  In his early days he was apprenticed as a flat jockey to Jack Waugh, but an early decision and the of insistance by a fatidious Clerk of the Scales Official at Salisbury Racecourse suggested that to decifer Gordon from the ledgendery champion flat jockey Sir Gordon Richards, there had to be some sort of name change. So it came to be that the middle initial of a "W" was allegedly inserted into his name which was apparently taken from Jack Waugh's surname!.

Becoming too heavy for the flat, he rode as a National Hunt jockey for Ivor Anthony and Johnny Marshall; his career as a jockey was ended by a fall at Perth Racecourse in which he broke his back.

In 1964 he took out a licence to train, initially at Beadnell, Northumberland before moving to Greystoke Castle Stables stables near Penrith in Cumbria in 1968. He subsequently moved to a new purpose-built stables at The Rectory Farm in Greystoke village in 1988.

Gordon unfortunately died from cancer in Carlisle, Cumbria on 29th September 1998.  He was also fondly know by many as "The Boss".